Within an hour of our arrival at the seaside resort of Menton my over-excited Chou had managed to fall face-first into the Mediterranean. Luckily we came prepared for such inevitabilities (I had risen at six o’clock that morning to start the arduous task of packing, mainly comprising as much of his wardrobe as I could find clean). Having laughed unsympathetically and picked him up out of the water, we squelched off to find our new home for the next four nights.

Menton is perfect for families with small children – the four rickety and slanting flights of stairs up to our beautifully quaint ‘penthouse’ appartement in the heart of the old town alone were ideal for tiring out a rascally tot who insisted upon making the ascent personally (there does appear to be a fair amount of ‘new’ Menton, and I imagine that the town, like the rest of the Côte d’Azur, is swamped in high season). The location of our holiday home proved perfect for everyone in fact, since my husband and I had to tiptoe through our sleeping son’s room to get to our own bed – a high risk game, made slightly less terrifying by the fact that the stairs had temporarily triumphed over his untiring mission to resist sleep. The sandier of two beaches, ‘Les Sablettes‘, is situated in a little bay looking out onto Italy, with consequently few waves and very little tidal activity – perfect for unsteady little legs to paddle, unaided. By far the best attraction that Menton had to offer, as far as my Chou was concerned, however, was the fact that the beachfront was being renovated and had been transformed into an enormous building site, complete with excavators and wheel loaders (my son has been painstakingly thorough in his supervision of my education regarding construction vehicle identification). 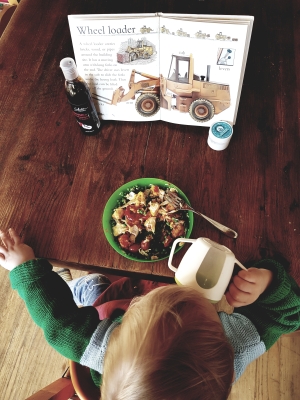 Officially dubbed ‘The pearl of France’ Menton undoubtedly deserves its reputation of beauty and loveliness. Impressively patronised by the likes of Queen Victoria herself, the little we saw of Menton was charming indeed, and well-worth the eight-and-a-half hours of driving (plus toilet stops) it took to get there. Our designated tour guide, however, was an obstinate creature, unprofessional in the extreme, who preferred to restrict our route to the sites that could be seen on the pedestrian road between the beach and the merry-go-round, our accommodation lying somewhere in the middle. He begrudged me a peak inside the basilique (which always makes me suspect the papacy to have an unhealthy obsession with enormous snakes – perhaps Eve wasn’t solely to blame for the original sin) and demanded to be tipped in rides and ice-cream. I wouldn’t recommend his indifferent and self-interested services. He did, at least, allow us to make a couple of foreign excursions during our trip (just because we could) – twice to Monaco (to be recorded in more detail later) and once to a beach on an unassuming, residential strip of the Italian coast, where we stood out conspicuously as the pasty, sun-deprived tourists that we were.

Back in the hazy mists of a halcyon, pre-Chou era (tranquil and carefree) my husband and I would typically while away the lazy twilight hours of our holiday in a restaurant – sampling, over the ensuing evenings, as much of the local cuisine as our budget and time-restraints allowed. Ideally, we thought, we would be sitting on a beach in Thailand (whilst on honeymoon, for example), sipping Gin and Tonic and watching the sun set slowly over the ocean. How naïve we once were! How unambitious and unimaginative! Our Chou has, since his inclusion on family trips, kindly amended our erroneous definition of ‘ideal’. We now know that true holiday bliss is a precious gift, bestowed sparingly upon a lucky few, whereby no-one throws a tantrum, there is no emergency laundry to wash (or, failing which, to store in some way until we get home) and we all sleep through the night.

The post-Chou path towards reaching that nirvana now includes eschewing hotels in preference for self-catered accommodation, and avoiding all restaurants like the plague. We came to the unanimous decision about hotels whilst mini-breaking in Budapest last year: our baby-monitor tempted us as far as the entrance to the hotel restaurant, then cut us off mercilessly. We, therefore, resigned ourselves to a long weekend of eating unvarying room service food in the hallway, whilst our Chou slept within, then whiling away the hours until bedtime in the hotel lobby, where at least there we had monitor-approved access to a bar). In Menton, expecting four evenings of basic holiday fare, fortified by the occasional ice-cream and glass of rosé, we were lucky enough to find a local restaurant which offered not only an array of dishes virtually unknown to our little part of France, but also a take-away option. That night we feasted on such regional delicacies as tikka masala, pilaf rice, naan, and the slightly less well-known ‘saag qui rit‘**. It had been four years since our last Indian takeaway

If we return to Menton, as I hope we shall, I would like to visit in February, during the annual lemon festival. I gather that enormous floats parade through the town, decorated in gigantic structures composed entirely of lemons. It sounds amazing!

** Falsely advertised as ‘paneer saag’, the cheese was unquestionably descended from the house of the ‘Laughing Cow’, which, in the original French, is called ‘La vache qui rit’.

29 thoughts on “Menton: The chin of France*”

What do you think? Cancel reply

Follow Chomeuse with a Chou on WordPress.com
Join 183 other subscribers