A very belated happy May Day and bonne Fête du Travail to all!

I had intended to resume writing last week, once I had finally caught up with life after the inevitable chaos of a two week Vacances de Printemps. France and the builders, however, had other plans. Whereas French workers are celebrated with a bank holiday on May 1st (not so in Geneva, where the workers just keeping working – a shrewd move, clearly a contributing factor in maintaining the status quo of unimaginable, and for most intangible, wealth) there has been no such peace for this travailleuse. The four French bank holidays scheduled for this month means that I have more time to play with my Chou (which is lovely but effectively banishes all productivity). I spent a frustrating morning searching the local foire du 1er mai, in vain, for a harem for Mr. Tulkinghorn (resident bachelor duck, adopted on my chou’s birthday at the annual Armastice Day fair), with a toddler whose chief concern was the inspection of two enormous tractors for sale in total disregard for anything else (the consequences of which can be found here). The builders have finally finished attacking the walls of our home, which means that there are now scores more stones to heave into their new homes in the borders of various beds, plots and patches in the garden, and that my husband and I, armed with a hammer and chisel apiece, now face many evenings of coaxing decades-old concrete render from from our new sitting room wall and then repointing it.
Meanwhile in the jungle, digging is interminable – the garden is fighting back. My trusty fork became a casualty of war. Although I recovered his loss with tolerable ease, finding a replacement with possibly unbecoming speed, my chou remains loyal to his memory, and reminds me daily of my part in the terrible crime. 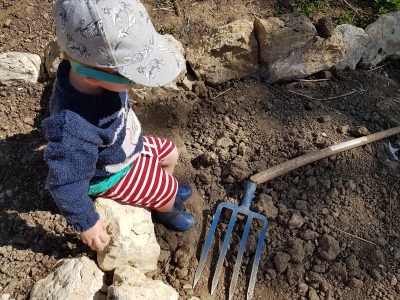 At least the main vegetable garden is finished, apart from paving the middle (where I plan to sit and sip kir) and planting the final bed. I am only waiting for my chilli plants to mature before completing this year’s potager. This addition has been some months in the making, taking far more effort than I had anticipated, and ending in a furious display of digging and planting to have it (almost) finished before going on holiday. The only things now standing in the way of a triumphant harvest are three chickens, who insist upon scratching up everything in their path, whilst on the hunt for wiggly worms. My husband has taken drastic measures:

Now that spring is in full bloom my shameful lack of horticultural knowledge is telling against me. Unless I specifically remember planting something I have almost no way of identifying a flower from an unusual weed. Take, for instance, a peony tuber planted last year. Despite following the instructions precisely nothing emerged and I assumed that it had died. Now, one year later, a plant has started to shoot up in the same place. I spent most of April nursing it, even building a protective netting tipi to shield it from our menagerie, yet for the first fortnight at least I wondered whether, after all this effort, the plant was going to double-cross me and turn into bindweed. Now, after a month’s growth, it is definitely not bindweed (on which species I am rapidly becoming an expert), but still not necessarily the hoped-for peony. I look forward to a surprise reveal later in the season.

The flower beds, generally, have now almost been restored to their newly planted state of last year, before the cats dug everything up and ruined summer. I took no chances this year and cheated by buying my beautiful flowers in pots rather than raising them from seed again. Even the bed ravaged by the builders’ ‘tipper digger’ and an onslaught of rocks has, surprisingly, rallied. The little garden centre opposite our supermarket has a rapidly changing range of plants (a cunning scheme to tempt armchair gardeners like myself to pop in on a weekly basis) from which I am increasing our stock. If my husband will choose to stay at home during nap time whilst I do the Saturday shopping he has only himself to blame if some pretty flower or other (most recently a stunning purple lupin) just happens to fall into my basket.

Of course, as soon as we returned home from holiday my husband discovered that a colony of bees had taken advantage of our four-night absence and moved in to a little wood pile right outside the house (originally intended as kindling for our wood burner, but subsequently forgotten about and left to fester). He spent that weekend deconstructing their converted abri pour abeilles, and moving it down (with great caution) to the bottom of the garden, which, thankfully, they appear not to have minded. Inevitably, once the heap and accompanying debris had been moved, it was discovered that two of the wooden supports holding up our roof had started to rot some years ago, unbeknownst to us when we moved in. There is never a moment’s peace in this home – we must be very wicked.
Les victimes:

I have had an unfortunate killing relapse. I appear to be incapable of tending to both outdoor and indoor plants simultaneously. My surviving pomegranate and both avocado plants have perished. I blame their demise on the 30°c heatwave that hit us after coming back from Menton. Knowing that these are sun-loving loungers I conscientiously carried them outside as soon as the sun appeared. I fear that the sudden shock after months in the cold gloom may have been too much for them. Still, as the saying goes: ‘If at first you don’t succeed, buy another pomegranate.’ Three seeds were saved from being wolfed my son (the unusual choices of pomegranate, olives, all nuts, and spice are delicious; carrots and anything classed as ‘yucky green’ are not) and are considering whether to bother germinating or not.
Mots du jour:

24 thoughts on “Ça pousse, avril: So much work, so little time”

What do you think? Cancel reply

Follow Chomeuse with a Chou on WordPress.com
Join 183 other followers